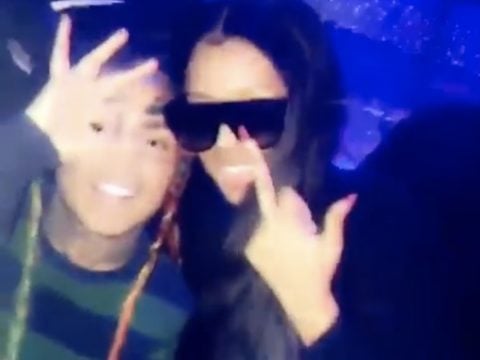 New York rapper Tekashi 6ix9ine knows how to make news from behind bars. A fresh prison pic has surfaced of the jailed rap entertainer alongside his girlfriend.

Big Facts: This week, a must-see pic emerged of 6ix9ine standing next to his publicized boo Jade.

New photo of #tekashi69’s former manager #shotti in prison.. He was sentenced to 15 years.. Thoughts??

Former Tekashi 6ix9ine manager Kifano “Shotti” Jordan has been sentenced to 15 years in prison after previously pleading guilty to one count of firearm possession during a crime and one count of firearm discharge during a crime, as the Southern District of New York confirms to Pitchfork. The charges stemmed from two separate incidents from April 2018, all of which also involved 6ix9ine. (Pitchfork)

Before You Go: According to reports, 6ix9ine will have to receive mental help and continue working with the feds once he’s released from prison as part of his plea agreement.

The rapper’s been ordered by the court to enroll in an outpatient mental health program once he’s free … according to new legal docs obtained by TMZ. In addition, 6ix9ine must continue to cooperate with the U.S. Attorney’s Office once he’s released from prison in any ongoing investigations where he might be useful. The court’s recommended Tekashi be placed in a correctional facility as close to New York City as possible — so his family can easily visit him. (TMZ)

When you are protected by the lord
Dog teasing baby