"Human Spider" Alain Robert has been banned from climbing any building in the UK after illegally scaling one of London's tallest towers with no safety gear.

The 56-year-old grandfather was arrested after ascending the 662ft (202m) Heron Tower, also known as the Salesforce Tower, in a stunt which saw police close the surrounding roads as soon as they were alerted to the drama.

He reached the top in around 45 minutes, to cheers from the crowd which had formed below, and immediately handed waiting police officers his passport and the number of his lawyer.

Robert, who has previously scaled buildings including the Burj Khalifa in Dubai, and the Empire State Building in New York, pleaded guilty to causing a public nuisance during a hearing at City of London Magistrates' Court. 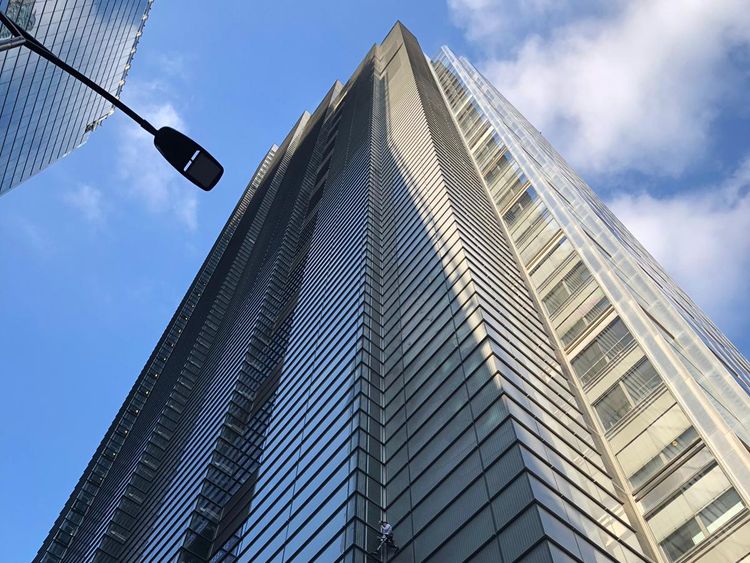 He was sentenced to 20 weeks imprisonment, suspended for two years, ordered to pay £5,500 compensation to the City of London Police and banned from climbing the outside of any building in the UK.

Chairman of the bench Edward McMullan said: "You are demonstrably an accomplished climber but there is always the danger that your actions could be imitated by those less proficient, with potentially fatal consequences."

Before the stunt, Robert told Sky News his targets when climbing a building are "going to the top" and "to stay alive".

"When you are climbing, as I'm not using any safety devices, when life is at stake, I guarantee that you are focused," he said.

Police, fire and ambulance crews attended the scene at around 1.40pm on Thursday. 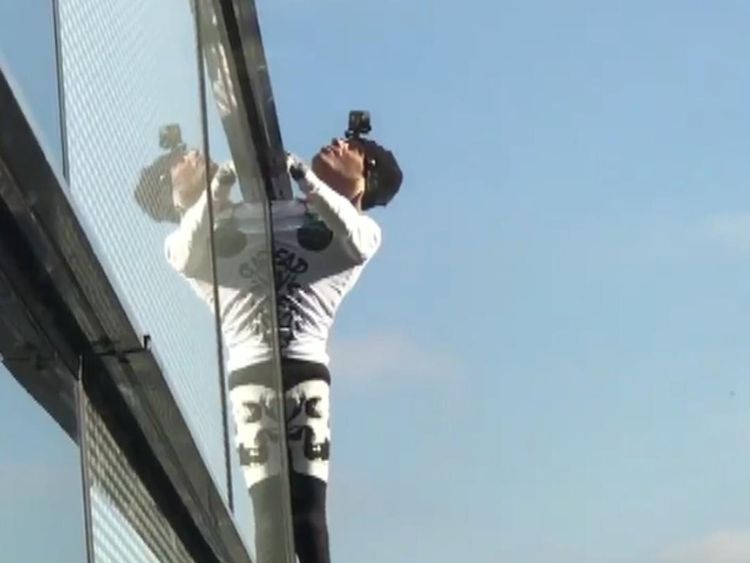 Image: Robert said the climb was 'not just a publicity stunt'

Prosecutor Malachy Pakenham described the incident as a publicity stunt and said Robert appeared to have been sponsored, as he was wearing a T-shirt bearing a company logo.

The cost of the disruption to the building's owner totalled thousands of pounds, and the stunt also put a burden on the emergency services, he told the court.

"Police were concerned about the climber's safety and if he fell off the building, whether he could fall on persons below," Mr Pakenham said.

Adeela Khan, defending Robert, said he had "no intention or foresight" of the disruption he could cause.

"He has been climbing for 44 years and is an extremely experienced climber, one of the best in the world," she said.

"He has won awards for this sort of climbing - he perceived the risk of falling to be either non-existent or very minimal."

She admitted there "was some commercial motivation" but said it was not "just a publicity stunt" and that Robert "feels that he is seen as an inspiration".

"The general reaction of the public was extremely positive," she said.

"There were lots of people outside taking photographs and watching the ascent, all the people watching it were inspired by Mr Robert's action and felt it was something they enjoyed watching."

Robert was previously arrested and released without charge in 2009 after climbing the Lloyds building in London.

I know you guys are used to sucking fish but a bab...
Zooming in... crash course!!!