Some Deliveroo riders have refused to work in parts of London after a spate of acid attacks.

The food delivery company said 71 of its drivers had refused jobs in London and seven have been reassigned to different locations after raising concerns about their safety.

A Deliveroo moped rider was among those attacked during a rampage through the London Borough of Hackney last month which saw five people injured within 90 minutes.

He told the BBC's Victoria Derbyshire programme: “It was like getting fire on my face, I was screaming on the street.

“This shouldn't be a job where your life should be put at risk.

“Drivers I know are now clocking off at 22:00, it's too dangerous after then.

“Now, I feel I'm working in some sort of jungle, like anything can eat me, I'm not safe.”

Deliveroo said on Thursday that it had introduced a range of measures to help protect drivers including a new app feature that allows riders to raise security concerns about particular locations. The company is also trialling helmet cameras to allow riders to gather evidence that may aid future police investigations and said it plans to hire 50 new staff who will focus on rider safety. 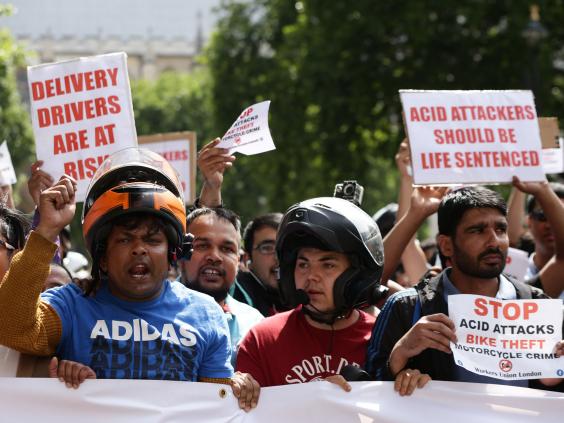 “We will do everything we can to protect our riders and have put in place new measures so that riders can report any concerns they have or even move to work in another area if they feel unsafe,” Dan Warne, managing director for Deliveroo UK, said.

“We are working closely with the police and local councils, and are sharing all the information our riders give us in order to help tackle crime against [them].

“[This] is why we’re implementing new measures like our app, and helmet-mounted cameras - these will allow us to work together, share information, and bring criminals to justice.”

Business picture of the day

The number of acid attacks in the UK has more than doubled since 2012 and increased by 74 per cent in the past year alone, with the vast majority of incidents taking place in London.

Just two years ago, the Government ignored expert advice and made changes that made it easier to buy dangerous acids of the kind used in recent weeks, The Independent revealed.

Changes made in the Deregulation Act 2015 scrapped an obligation on sellers of dangerous substances, including acids, to be registered with their local council.

As ministers boasted about “cutting red tape”, medical experts warned that it could make it easier for criminals to get their hands on highly toxic substances, as did the Government’s own advisory board on the regulation of hazardous chemicals.