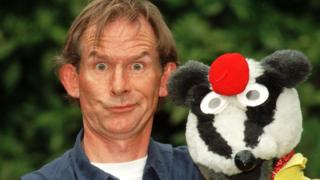 Andy Cunningham, the creator of children's TV show Bodger and Badger, has died from cancer at the age of 67.

He also starred in the BBC show, in which he played handyman Simon Bodger and provided the voice for the beret-wearing badger that loved mashed potato.

Mr Cunningham died at the Royal Sussex County Hospital in Brighton on Monday.

His sister Tessa said he "lived to be loved and to make people laugh, starting with me, his little sister".

Mr Cunningham, who read English at Cambridge, gave comedian Julian Clary his first job when he was writing and directing for the Covent Garden Community Theatre Group, and he worked as a puppeteer in the Star Wars film Return of the Jedi.

"He had a quicksilver brain, a rebellious attitude, boundless compassion particularly for the underdog, unstinting levels of generosity and, of course, a passion for mashed potato," Ms Cunningham said.

"I adored him and, long before he found fame, was immensely proud to have the funniest, cleverest big brother in the universe."

Mr Cunningham's former partner and close friend Jane Bassett was with him when he died, along with his sister and nieces.

Tributes have been paid on Twitter to Mr Cunningham.

@ChrisW_Theatre tweeted the BBC "Lovely tribute from his sister", while Lesley Coutts said: "Loved this show x will be sadly missed xx RIP".